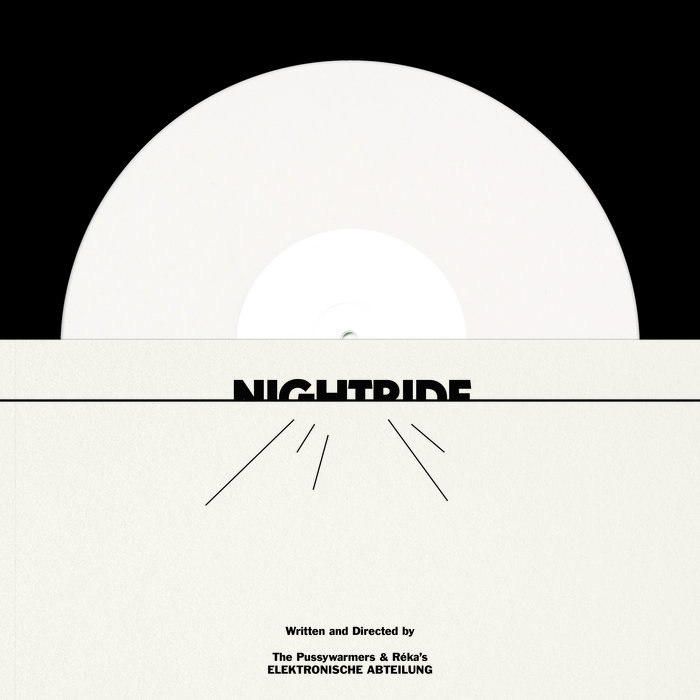 And now it’s dark... Here comes NIGHTRIDE, less of an album than a Gesamtkunstwerk, devised by The Pussywarmers & Réka in their newest conceptual lineup, the ELEKTRONISCHE ABTEILUNG.

Forgotten synths, analog filters, hypnotic samples and loops conjure up a previously untold tale of the ultimate ride – the one into the Night.

Sketched out in the solitude of a godforsaken mountain cottage that serves as the band’s current hideout, NIGHTRIDE clearly marks the Pussywarmers’ transition towards a different understanding of what writing music can mean. A sensual ode to the Night, perceived and portrayed as both dreadful and irresistible, borrowing from its rhythms – delayed, repetitive and compulsive.

Tracked and mixed at the Pussywarmers’ own recording facility near Lugano with a broad selection of magnetic tapes, discontinued keyboards, Logic and a layer of Persuasive Percussions by Nic Mauskovic (ex Jacco Gardner), NIGHTRIDE will appear over the horizon as a fullmoon-white 12” vinyl wrapped in a one-of- a-kind cover designed by Ronny Hunger.

And now it’s dark... Here comes NIGHTRIDE, less of an album than a Gesamtkunstwerk, devised by The Pussywarmers & Réka in their newest conceptual lineup, the ELEKTRONISCHE ABTEILUNG.

In the Voodoo Rhythm Family since 2009, with 3 long playing records of original tunes up their sleeve, The Pussywarmers have touched down here, there and pretty much everywhere. ... more

Bandcamp Daily  your guide to the world of Bandcamp